SL9B and the “Secret Sauce”

A lot of people are evaluating the SL9B success and there’s great enthusiasm for SL10B already. I kind of ran out of blogging steam after a my blogathon last Saturday, but I have some things I still want to write about. I want to use this last post to take a look at a couple of my ideas about SL’s “Secret Sauce.” 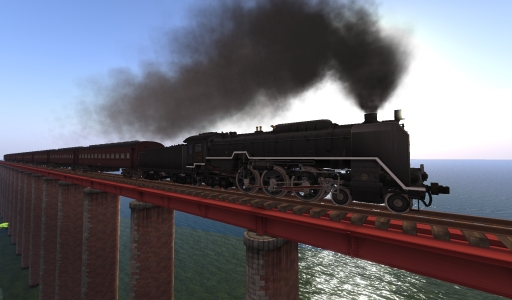 That big train sitting on the outer edge of SL9B
is being loaded up and will pull away today.

I need to start by saying my experiences in the past couple of months have expanded my frames of reference. I’ve learned more about communities and community leaders. I’ve gotten to know more of SL’s writers and media. And my point of view has expanded outside my comfort zone.

Thanks to SL9B, I’ve also gotten to know more about people in the far reaches of Second Life. And I’ve seen my basic premise — When Second Life is at its best there are infinite possibilities — to be  true and I’ve spoken with many people experienced something wonderful in SL during the past month. I tried to express those feelings in my post on iRez.

And I made another huge discovery.

One of my early assertions about the secret sauce — Thousands of thriving communities blend in their unique spices to the giant SL “secret sauce” pot — and I believe that is obvious, but what I failed to notice is there is one giant Second Life community.

Second Life’s 9th Birthday theme was “Community” and even though the heart and soul of SL is based in small communities, the global community is capable of acting in ways I never imagined. I believed there were too many competing interests among different groups to create a global initiative. It seem unlikely to me that all those groups could work together with effectiveness. I assumed Linden Lab must always provide the leadership to coordinated any “global” initiative.

If you attended SL9B you saw the results of the planning and building. If you attended the performances or events or just wandered around, you shared in the celebration. No one saw every performance and every exhibit. So, if you want to look deeper into all happened I point you to the official SL9B website, all my SL9B posts and the huge body of information produced by a hundred bloggers and other media sources (just Google “SL9B”).

In the opening ceremony, Saffia Widdershinns remarked that this event almost didn’t happen. I didn’t pay a lot of attention to the details that led a group of SL residents taking the reins of Second Life’s birthday party celebration, but I was witiness to the process. In the end, a group came together despite Linden Lab’s lack of involvement. This was Second Life at its best and that is the best example of SL’s “Secret Sauce”!

I’ll finish my observations about how SL9B came to be in a forthcoming post on iRez.me.

I'm a blogger and photographer on WordPress. I'm also author of the sci-fi novel The Temporal Expeditions, and am working on book 2 of a planned trilogy.
View all posts by Yordie →
This entry was posted in Events and tagged Community, Events, Linden Lab, Second Life. Bookmark the permalink.