Like many residents, I attended the One Billion Rising in Second Life event yesterday. I was happy to be there to show support for sisters around the world who face the threat and reality of violence and rape. The event organizers did an amazing job of building an inspiring venue and scheduling outstanding performers.

Many friends and many well-known Second Life personalities were there to show support throughout the day. I spent several hours at the event and chatted with friends, fellow bloggers and event staff. Also, I noticed one video producer at work and another told me she was streaming live. 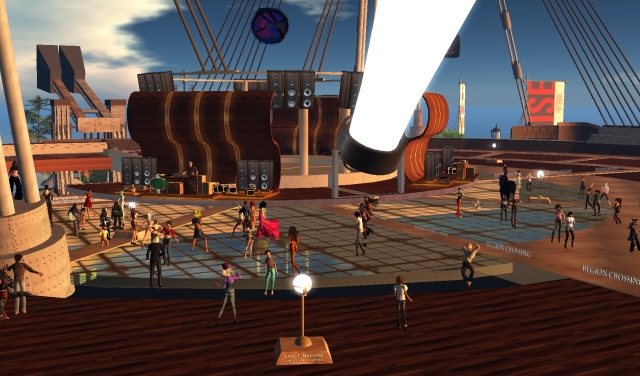 The four sims of OBR
had large numbers of supporters
throughout the day. 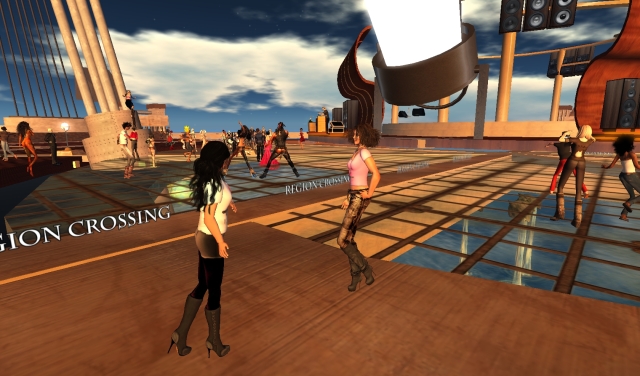 That’s Pearl and me just dancing and chatting.

Fellow blogger Pearl Grey and I chatted for at least an hour. One topic we talked about was that we’d observed some incidents of disrespect toward the event. Earlier, a guy costumed like a rugged dude landed on the sim I landed on. In addition to his tough look, he was wearing enormous breasts, obviously disrespectful of the event. As I tried to walk to the event stage, he tried to follow me.

Event greeters did a good job handling griefers, so there was no serious trouble. Nonetheless, the incidents of disrespect saddened me. Under the cloak of anonymity, the very people who either carry out or enable acts of violence toward women were in our midst. Regardless of the griefers, OBR found strength in the many men supporters, and god bless them for being there.

I can’t help but reflect on the old axiom, “A journey of a thousand miles begins with a single step.” The journey of women’s struggle to be physically safe began long ago. Over the millenia, most civilized societies have come to treat rape and violence toward women as a crime. The global One Billion Rising event is another step, hopefully a giant step, on that journey. And supporters in Second Life helped!

BTW, if you missed OBR yesterday, you can still see the awesome sims — checkout this post.

I'm an avatar from Second Life and Xbox gamer. I wrote the sci-fi novel The Temporal Expeditions, and am working on book 2 of trilogy.
View all posts by Yordie →
This entry was posted in Events and tagged Community, Events, Second Life. Bookmark the permalink.