I beamed into SL11B a couple times on Saturday. I continued to explore and ended up seeing a whole lot more than I had planned.

All the treats on this table cost only a handful of Mesh objects.
And all of that stuff would have taken dozens of Prims.
Mesh has truly transformed how you can broaden your SL. 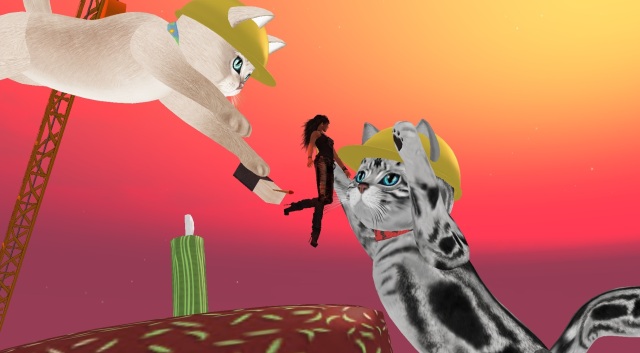 That’s me atop Callie Cline’s SL11B cake…
Oh, yeah, and I’m also caught between two of her kitties. 🙂

I saw several exhibits by SL military supporters.
I have enormous respect for our military and allies,
and I am glad to see builds that demonstrate commitment.

This is a kiosk that presents dozens of SL topics
for you to mull and cast a vote on with Facebook.
If you care about SL, I think it’s worth your while to make your opinion known.

I’m glad I attended this event. Hope you enjoyed it too.

I'm an avatar from Second Life, a gamer on Xbox, and the author of The Temporal Expeditions sci-fi novel series.
View all posts by Yordie →
This entry was posted in Events and tagged Community, Events, Exploring, Parties, Photography, Second Life. Bookmark the permalink.