Fallout 4 came out two years ago with Xbox One. I saw the ad on television and thought it looked really cool–with a dog companion even–and it provided for a female protagonist (excellent!). It had my interest but I had recently purchased Xbox 360 and didn’t want to upgrade. Fast forward two years and I bought Xbox One as a Christmas present for myself just before Thanksgiving and started playing Fallout 4 the day after. OMG! It was soooooo immersive. I dropped other projects, including my novel, and for the first couple of days I played until the wee hours. 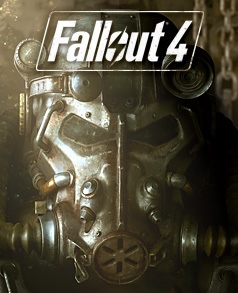 As I’ve said many times, I’m not a gamer. It is true. But I do play some video games from time to time. Until Fallout 4 my favorites were Lara Croft/Tomb Raider games (LCTR and ROTR). Anyway, as a non-gamer who plays video games, I don’t have the gaming skills that true gamers have. And I hadn’t played anything like F4, so it took me awhile to get used to the Bethesda platform and controls. So I started out at Very Easy, which is not that very easy, but I got going with it. And by the time I got my dog, Dogmeat, I was hooked on the game and the evolving story.

There was plenty of shoot’em up and all that, not my favorite stuff but killing a pre-historic Deathclaw (kind of a Tyrannosaurus)  got my adrenaline pumping, even though I was blasting the monster with a red-hot mini-gun. *smiles* The thing about game that intrigued me was the quest, find your son who had been stolen. It was a powerful motivator and I bought into this wholeheartedly. In fact, the game and story are so well designed that there are only a couple of decisions you make that lock you on a track; otherwise, the game play is free and open. In fact, the commercial played with an old 60s song featuring the words: “I’m the kind of guy who likes to roam around…” And the way the designers stuck with this theme is amazing.

Of all the things in the game that I liked, my favorite was the creating of settlements. I enjoyed the building, recruiting and culling of settlers, even matching some settler up for maybe romance, although there is no romance or sex in the game. Like I sent a good looking guy over to Abernathy Farm to meet the cute daughter. Nothing happened but the settlements ‘Happiness’ rating did go up. HAHA. I liked the power armor also. It was cool, stomping around in something like a personal tank. Feral ghouls and all other monsters would try to kill you but you were safe with your Laser Rifle blasting away. The problem with power armor is that it needs repair after most battles, and the best of the armor drains away valuable resources. Still, totally cool.

The things I like least were the lead characters who were designed to give you orders to follow, especially Preston who I came to despise. Others were bad also, but this is how you get your quests, so they are a necessary annoyance. I’m glad that gore was kept to reasonable levels, even less gore than with the Tomb Raider games, but there were some characters I wanted to murder. I even murdered one and felt horrible after it, so I replayed that sequence. Nonetheless, these irritating characters are part of the genius of the game. Only true monsters and even beings are just black and white, and I had no sense of upset while killing the Super Mutants and other evil beings.

Long story short, I played through to one of four outcomes–Airship Down–and was really upset with the choice I made. So I went back several steps and replayed it to The Nuclear Option. I reached Level 60-something before walking away. And all of this took months! Not every day, day and night, but something akin to that. I’d recommend this to everyone, but I’m certain that most people do not see the world through my eyes. HEH.

I'm an avatar from Second Life and Xbox gamer. I wrote the sci-fi novel The Temporal Expeditions, and am working on book 2 of trilogy.
View all posts by Yordie →
This entry was posted in Journal and tagged Gaming. Bookmark the permalink.