SPOILER ALERT: I reached Level 100 last night, currently at 24 “Days” (whatever the Days counter means). I’m still only playing on the Normal Setting and even though I think I can handle the next harder setting I’m still more interested in building my settlements than in fighting even harder mutants and all manner of crazed beings out to kill me and my settlers. I’m also at peace with all three major Factions (Minutemen, Brotherhood and Railroad) and even at peace with Far Harbor’s Children of Atom and the Synths at Acadia.

Nonetheless, I really dislike the Brotherhood because they pester me about “including [my] brothers and sisters… [yada, yada]”. I also dislike their whole fascist point of view, but when you look at the Commonwealth as a dangerous place, they Brotherhood is a force for controlling the evil. I also like some of the characters like Paladin Danse, Proctor Quinlin (plus his cat) and Proctor Ingram, and to some extent I even like “Elder” Maxon. I wouldn’t mind going to war against them though, and if somehow they get that damned Liberty Prime badass thang, then it is war for sure.

I own several add-ons: Far Harbor, Vault-Tec Workshops (didn’t like the batsh*t ghoul Overseer at all), two other workshops, and I’m considering buying Automatron but don’t think I’d like Nuka-World. I own many of the Creation Club items including the Noir Penthouse and both other houses, plus I bought dogs for all of my settlements (now at 15 fully functioning).

All of my settlements are now manned with at least 15 people, although I’m still building up The Slog (currently 8). My big three settlements–Sanctuary, Starlight, The Castle–have 20 people each. Half of the people at each settlement are assigned to Defense, the other half are either Farmers or work at the bars, stores or are doctors. All settlements have three stores but the big ones have two additional, and Sanctuary has a Slocum’s Joe, right there, inside the fortifications… pretty cool and I like having it there but it hasn’t seemed to add to my revenues. 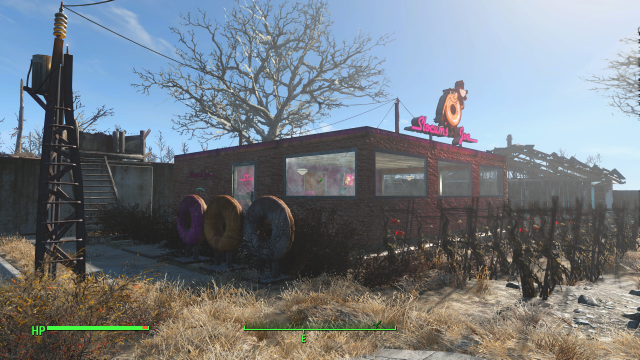 All of my settlements have a dog, a brahmin, caravan rest areas, 100w Fusion power and many have Level 4 weapons for defense (I especially like the rocket launchers). I’m not using artillery yet, but maybe in the future.

Here’s a look at my workshop inside the walls of the “Green Jewel of the Commonwealth”. Notice all my bobbleheads. I have all of them now. Oh, and that weird suit of combat armor, that’s Marine combat armor from Far Harbor. I have so many suits of power armor that I have a half-dozen stashed at large settlements, and the others are stashed at my townhouse. I even have one suit at the Noir Penthouse. 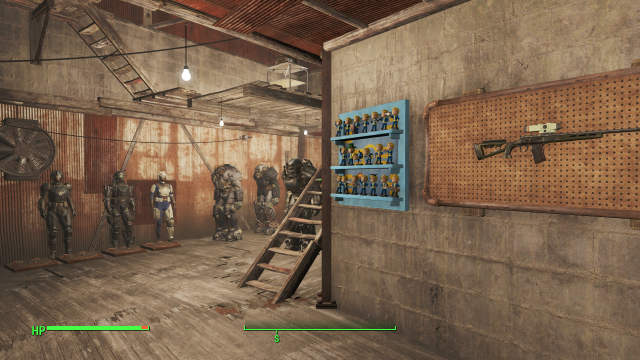 Another thing is my list of favorite characters and companions. I really like Deacon and now that I have Cait suited up in tough looking military gear (with a cute Combat Armor Helmet), she is cute. They are my favorite companions but I still prefer to go adventuring alone most of the time. I also like Old Longfellow but really have no use for Preston or Paladin Danse. As for named characters, I really enjoy Tinker Tom, The Mariner and Magnolia. I also despise everyone’s favorite downer couple, the Longs. There are many others of course, but in general the characters and companions are a great part of this game. And lest I forget, I adore my doggie, Dogmeat, the sweet German shepherd and crazed killer companion: “Everything okay boy?” /me smiles

Anyway, I could go on and on about this game (and probably will) but at Level 100 you develop a perspective. I want to remember this. I’ll be writing some negative things about the game when I’m in a different mood, like how it is infested with anomalies. Lah-dee-dah. I’m also been looking into Fallout 76 but that will be an online game and I’m not sure I’m up for that. Maybe. Thinking about it.

I'm a blogger and photographer on WordPress. I'm also author of the sci-fi novel The Temporal Expeditions, and am working on book 2 of a planned trilogy.
View all posts by Yordie →
This entry was posted in Fallout 4 and tagged Fallout 4. Bookmark the permalink.