Yessie, I’ve been playing Fallout 76 for a couple months now. I steered clear of the game after all the reports of its many bugs and sloppy design last year. And I’m glad I did because I can truthfully say that I am delighted with the new game. Nonetheless, it was a challenging transition for me, into the world of multi-player games. 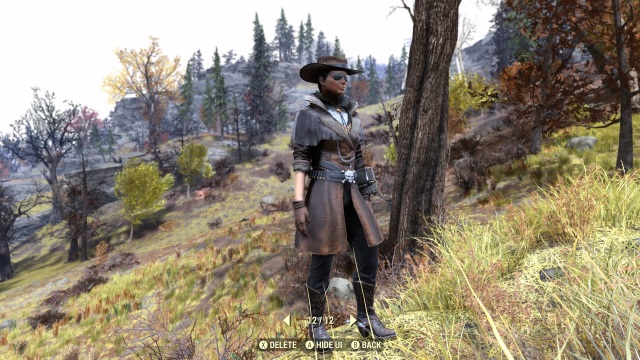 That’s me in my sniper outfit.

Yesterday I reached Level 30 and I have a lot of things going for me now, like a good sniper rifle, half-way decent armor, a cute outfit, 5,000+ caps and a store. Yes, I opened my own Level 30 store. It has three vendor machines that I’ve maxed out with all categories of items. I learned that the player owned stores is new feature from Bethesda, and I think it’s a home run.

That me standing in front of the store with my sniper’s rifle.
I just killed a pack of radrats and there’s a bunch of feral ghouls nearby. Heh.

I’ve never enjoyed player-vs-player games like World of Warcraft, but FO76 is a different slant on it. They have introduce a battle royal add-on to the game, but I’ve chosen to avoid all the PvP for now. Maybe once I get good at the game I’ll take a chance though.

I'm an avatar in Second Life and Xbox. I'm also the author of The Temporal Expeditions sci-fi novel series.
View all posts by Yordie →
This entry was posted in Fallout 4 and tagged Fallout 76, Gaming. Bookmark the permalink.
%d bloggers like this: