Okay, I’ve been playing Fallout 76 WAY TOO MUCH, especially this past weekend when I’m sure I was identified as an addicted player. Fiddleedee. I enjoy the game a great deal and I’m making friends but haven’t joined a group or a team yet. I need to get a headset/mic so I can talk to people because text really sucks with Xbox. I’m seriously thinking about it though, but I’m also seriously writing Book II of my sci-fi series.

Anyway, I’ve made a lot of progress climbing the Levels since the last post. I had a back to back double leveling up days, primarily spurred on by the silly “Graham’s Meat Week”. The thing about the Meat week is there’s a chance to kill a lot of Legendary creatures in a very short window and this adds up when you’re climbing the levels. I did the whole thing, even searched Appalachia for carrots to make a non-meat specialty for Graham.

The achievement I’m most happy about is my solo takedown of a Scorch Beast. While I was out looking for carrots, one of those nasty fiends came after me. In the past I used my invisibility to help keep me out of its grasp, but this time I pulled out my power armor, snapped a 250 round magazine into my 50 caliber machine gun (with armor piercing and other good things) and went after that beast. It took about 500 rounds to bring the beast down and then I was attacked by an irradiated bear. I’m wearing Level 45 Excavator armor, even though I have Level 50 T-60 armor; there’s a reason but it would have been wiser for me to be wearing the T-60.

That’s me right after I killed the Scorch Beast and bear.

This pic will give you a better sense of the beast’s size.

Anyway, I also moved my CAMP/store back to where I was originally, on the safe side of the Savage Divide. It’s a short story, but suffice it to say I just wasn’t ready for that neighborhood. I’m glad to be back in safer terrain, but after my recent successes I might move back in another 10 or so levels. Below is my new store. 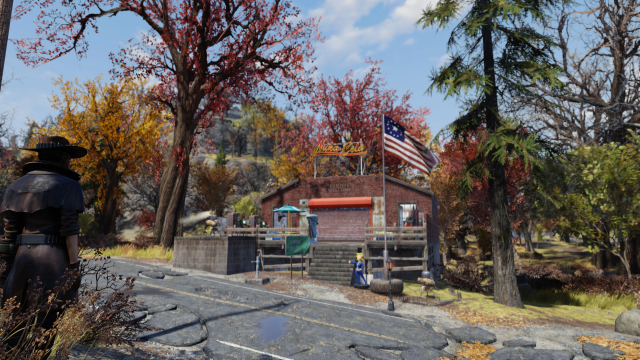 That’s the new store in the identical spot of the old store.

If you are wondering, I’m really too old to be playing this kind of game; I suppose. And I’m concerned that the gaming is taking me away from my writing project. Geez, if I wrote every day for the next two years I might get all three books out in 2021, and that’s the goal. Book I is done and at the publisher, scheduled to be ready for the holidays. More on this later; I’ve got to get back to the game! HAHAHA.

I'm an avatar in Second Life and Xbox. I'm also the author of The Temporal Expeditions sci-fi novel series.
View all posts by Yordie →
This entry was posted in Fallout 76 and tagged Adventure, Exploring, Fallout 76, Gaming, Photography, Role Play, Virtual Fantasy Life. Bookmark the permalink.
%d bloggers like this: