My new Fallout 76 character’s name is Sandy Lombardia. Sandy is also the protagonist in my sci-fi novel that was released for distribution today. It will be awhile before the book appears at the big online bookstores, but is currently available on my publisher’s site, Lulu Bookstore.

Sandy has been climbing back through the levels and last night she reached Level 38. I like this character much better because I’ve engineered my SPECIAL levels and associated Perk cards much more effectively.

Also last night, Sandy downed her first Scorch Beast (below). She can’t take all the credit though because there was a Chameleon Death Claw fighting the beast when I joined the fight. By the way, I have my own Chameleon armor now and was able to join the battle from afar before the Beast realized I was engaged. I move in on it as it weakened, but these monsters are tough to take down with lower level weapons. The same is true of those Billygoat Gruff creatures (aka Sheepsquatsh), very hard to take down. By the way, I really like the Light Machinegun, but it burns ammo like crazy; so, if you use it you better know how to make a lot of ammo. 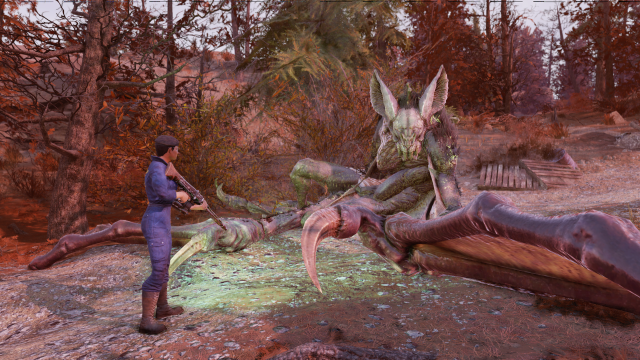 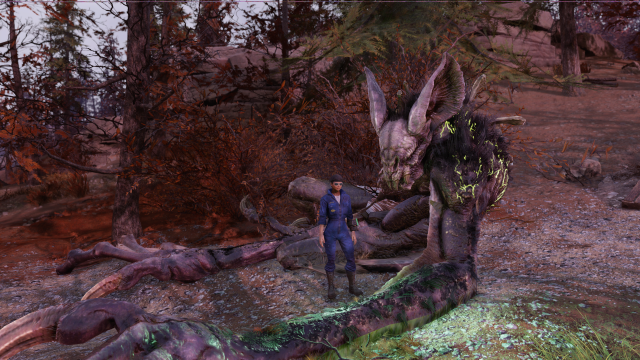 This pic gives a better perspective of the size of a Scorch Beast.

I really like this game and have purchased a headset to at least open the door to joining a team, and maybe someday entering Survival Mode. I’m still learning the intricacies of this game though, so it may take a long time.

I’m increasingly aware of critical bugs in the game, but feel that some of the complaints I had read about or seen in videos were simply dissatisfaction with the gameplay, which I happen to like…mostly. Some bugs are of the childish prank variety; meaning, they are either examples of poor programming practices or just intended to irritate the player.

One bug that is particularly troubling to me is the Soldier ID quest. What happened is, I made it through the U.S. Army training and was given my soldier papers, but when I tried to get my ID the quest disappeared. I’ve tried several of the suggested remedies, but there seems to be a major screwup with this quest. For one thing, when I attempted the quest I was under Level 30. Since then, the door into the quest requires Level 30+. I’ve submitted a support ticket but didn’t receive any reply. Just saying.

I'm an avatar from Second Life and Xbox gamer. I wrote the sci-fi novel The Temporal Expeditions, and am working on book 2 of trilogy.
View all posts by Yordie →
This entry was posted in Fallout 76 and tagged Adventure, Fallout 76, Writing. Bookmark the permalink.