I totally love this game and will have to slow down my play soon. Without question, one of my favorite aspects of the game is the Vendor capability that enables turning your C.A.M.P. into a camp/store. In Second Life I spent countless hours building Zen gardens and Asian cafes and Geisha houses (no, I’m not Asian).

Over a period of six years or so, I created seven distinctive SL gardens and spent countless hours building and shopping for resources for each. And I’m finding that FO76 is giving me a lot of that kind of satisfaction. Anyway, here’s my latest store, near the train station in Sutton.

This is my CAMP/Store near Sutton RR Station.
I only have to Vendor machines but do good business. 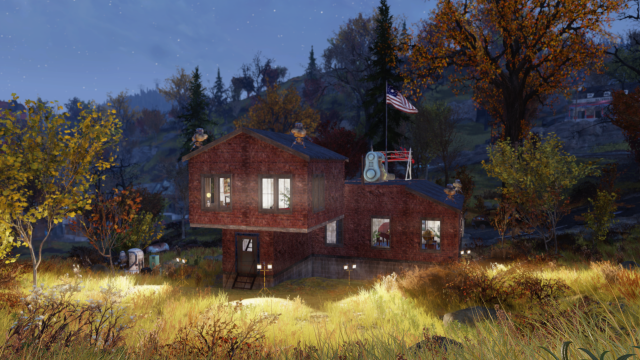 This is a view of the rear of my CAMP/Store.
The upper area is where I have my private room.

This is the interior of my private room.
It has a great panoramic view of the lands.

Oh, that’s poster in my bedroom, that’s Mr. Peeples – The first kitty in space! Just one of the things about this game that makes me smile. I’m trying to find out if I can direct a pack of kitties back to my house to live. I’m reluctant because I’m afraid they’ll just become targets for the wannabe psychopaths that show up in Adventure mode from time to time.

This past week my Sandy Lombardia character achieved Level 58 again (Yordie reached 58 a couple months ago). Despite the inconvenience of starting over, I’m happier with Sandy’s development and I have a much better understanding of the Perk system. Here are a few Level/Perk tips for newbies:

There are other nuances to the Level/Perk system, but I think it’s a genuine improvement to the Fallout 4 system. And by the way, there are many improvements in FO76 over FO4, in my humble opinion.

Wow! I’d heard about the Enclave early on after watching to an Oxhorn video, and I’ve been wondering about the whole Free State/Sam Blackwell/White Springs thing for months. I mean, there are portents and signs all around Appalachia but I’d never found my way into the Enclave until this past weekend. In fact, I had to dig up some spoiler information to find the path leading to Enclave membership. And even now, I am still working my way up the ranks.

For me, discovering the Enclave is the equivalent to finding The Institute in FO4. It is such a big deal and makes the game even more engaging. Now that I’m a member I’ve watched to Oxhorn and other videos about Enclave lore. The strange thing is, I just don’t recall anything about it in FO4; maybe I was just too preoccupied.

This game and the whole Fallout saga is so rich, I wish I’d been in on it all the way back to the original. I’ve tried to engage in FO3 but just couldn’t step back to the older tech, even though it was quite good (I use Xbox compatibility).

I’m aware of more and more bugs as I go deeper into the game, but Bethesda is releasing a steady stream of excellent bug fixes and enhancements. It is appreciated.

Purveyor: However, there is one gameplay feature that is so random and so bad I wish they’d just drop it though: The Legendary Item Purveyor. I’ve spent over 300 scripts on five separate useless items; like, a harpoon gun, a grotesque wooden chest piece, a stupid Assaultron head (TWICE). Last night I finally got something I’m at least willing to sell in my store, a piece of low level leather armor. All junk. I saw the recent ad saying that the Purveyor was slashing prices and this just makes me cringe: Lower prices for pure junk. Someone needs to rethink this. I’ll never try it again.

Despite my irritation with features like the Purveyor, I believe this game is a work of art and genius. I’m a software developer with enough knowledge of the tech to have an opinion and I’m truly in awe of Fallout 76. When you consider all the different tools and skill sets needed to produce a game of this scale and scope, the people involved must number in the thousands; I mean, people from the physics engine all the way to the story writers (and there are great stories, btw). I’m certain that someday I’ll begin playing in a team and probably move on to Survival mode.

I'm an avatar from Second Life and gamer on Xbox. I'm also the author of The Temporal Expeditions sci-fi novel series.
View all posts by Yordie →
This entry was posted in Fallout 76 and tagged Adventure, Creating & Building, Fallout 4, Fallout 76, Gaming. Bookmark the permalink.