On Saturday and Sunday I attended seven separate Fasnacht events. The pic is of me in my Fasnacht beret waiting for the next event to begin.

That’s me in my cute Fasnacht beret.

I attended three events on one server, two on another, and the other two on separate severs. Every event was well attended with  a dozen, and usually more participants each. Six of the seven events were great with fun people, all–more or less–working together and having fun. The one event that wasn’t any fun was the target of multiple attacks by griefers.

For those who don’t know what a “Griefer” is, it’s a game player who does things that will inhibit or otherwise annoy other players simply for the joy of causing others grief. I’ve known about griefers since I took a chance and played World of Warcraft in 2007, and got a huge dose of griefers when I played Second Life that same year. A lot of people choose to ignore the griefers, but it’s sort of like people trying to protest something then a gang shows up and begins burning down the cities they live in. Yeah, it’s the same type of person that does that. They enjoy seeing other people being hurt. Anyway, the griefing of Fasnacht has been reported by others (Marta Branco, others) but this is my own take on what happened.

First group of griefers showed up shortly after the event began. As the parade made it’s way to the little bridge leading across the river, they dropped their power armor in two separate groups. They realized that their power armor would automatically be returned in a couple minutes, so they dropped a second group (3 power armor sets in each group). Below is a photo of the blockage that was created by the prank.

I tried to report the griefers but there was no identification to identify then with, so I began blasting the heads off each suite of power armor with my 5.56 Handmade Rifle with exploding bullets. It was effective, but I really needed my 50 cal Machine Gun with exploding bullets to do the job fully. Loosing the helmet of a piece of power armor isn’t a particularly big deal, but at least I caused them some grief. For example, if the armor required any type of Stable Flux to install advanced features, they’ll have to use this precious resource to restore them. OTOH, my 5.56 didn’t have the power to do the job on the X-01 power armor, but I prolly caused damage.

I decided to solve the mystery, identify the griefers and report them. I went into stealth mode and saw a likely trio setting up for the next Fasnacht. They were building a fortress on the spot where Super Mutants spawn, thus requiring the mutants to spawn in a more vulnerable area. I took photos of the bad boys and have their names. One had a 400+ level, one was 100+ and the other was 70+. I’m not positive it was them though, so I didn’t report them, so I waited to see what they would do at the next event. But just as the next event began, another griefer nuked the entire area, sending everyone far away from the chaos, including the three suspects. Below is a photo from the beyond the impact zone; the gray cloud is the nuke cloud. 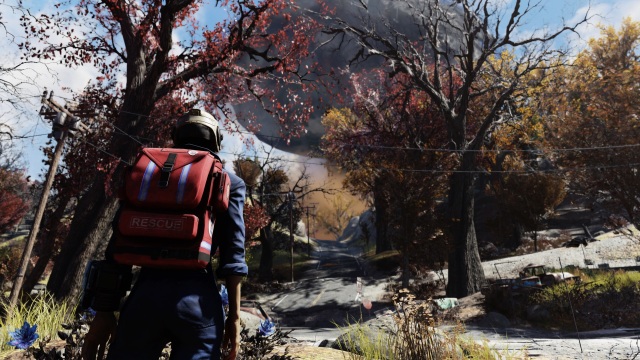 Watching the aftermath of a nuke dropped on Fasnacht parade.

NONETHELESS! If you aren’t driven off by the inevitable arrival of griefers in Fallout 76 or any other online multi-player game, then stick with it my friend. This game is a lot of fun and with events like the annual Fasnacht parade, it makes it a much more social experience.

If you are a griefer: there will come a time when criminologists will be able to build profiles of people like you. And some prosecutor will give you a lot of time to mull over the importance of things like rules, morals, citizenship, kindness, respect…and many other things.

I'm an avatar from Second Life and gamer on Xbox. I'm also the author of The Temporal Expeditions sci-fi novel series.
View all posts by Yordie →
This entry was posted in Fallout 76 and tagged Events, Fallout 76, Gaming, Griefing, Perspectives, Problems & Issues, Wastelanders. Bookmark the permalink.
%d bloggers like this: