I’ve been slowing creeping up the levels, currently 96. I’ve also finished Automatron and begun Far Harbor DLC, but I’m not near ready to step into the Nuka World DLC.

What I’ve been doing is increasing the strength of my settlements: 3 x Large-size (28 settlers + 1 assaultron robot each), all with 300+ defense; 6 x Medium-size (20 settlers each), all with 200+ defense; 1 Small safe house (5 settlers + 1 assaultron). I’ve also beefed up each settlers clothing, armor and weapons. As a result, morale is usually above 80+ and when settlements are attacked, they do a good job of defending themselves. I think having strong settlements is worth the effort, but it does take a lot of effort.

This is Starlight Drive-in main compound with concrete walls.

Sunshine Tidings, All Tidied Up

I’ve been avoiding building a settlement at Sunshine Tidings Co-op because even if you do a good job on the settlement, you still have a pile of persistent dead ghouls lying around everywhere — disgusting. Fortunately, I’ve installed a good mod for scrapping and cleaning up the place, and I’ve cleared out a lot of scrap and ugliness. Also, my green grass mod helped make the landscape friendlier. Once the clean-up was finished, Sunshine Tidings turned out to be a really nice place to build a Large-sized settlement. I’m not done yet but I intend to have 30+ settlers when it’s all done. Following are a couple pics that may surprise other Co-op haters!

This view gives you an idea of how nice the Co-op can look.

There are great fields for farming large crops. 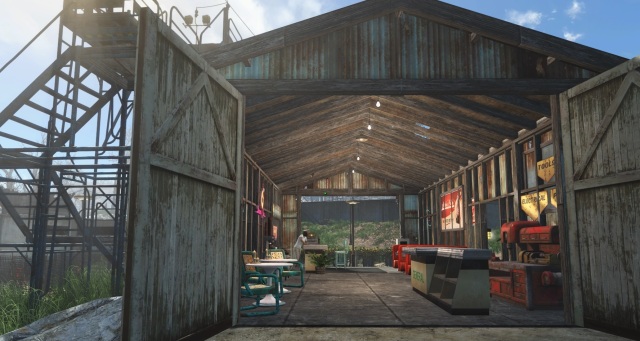 This gives you an idea of how one of the main buildings has been repurposed.

I was really surprised at how nicely Sunshine Tidings cleaned up. Thanks to a clean-up mod (even with its side effects), this is now one of my favorite settlements. Currently I have only 11 settlers, so there’s still have a lot of work to do and a lot of battles to fight, but I’m hopeful that this outpost will anchor the northwestern territory of the Commonwealth.

In the coming days and weeks I think I’ll build settlements at the ghoul farm and the coastal lighthouse. I also intend to build a fortress for Old Longfellow; I can’t help but liking this guy and I’m thinking of sending Curie up there to keep him company. I fear she’ll talk his ear off though. Lawdy! That girl is a Chatty Kathy.

I also plan to feature my other settlements soon. If you intend to build strong settlements, you quickly learn that each settlement presents its own special challenges. I’m also thinking about trying out the Sim Settlements mod for one settlement.

I'm an avatar from Second Life and gamer on Xbox. I'm also the author of The Temporal Expeditions sci-fi novel series.
View all posts by Yordie →
This entry was posted in Fallout 4 and tagged Creating & Building, Fallout 4, FO4 Mods, FO4 Settlements, Gaming, Photography. Bookmark the permalink.