I was at Level 62 when I wrote my last blog post, but I’ve been busy and am now Level 75. In fact, I’ve been waiting to begin “The Nuclear Option” and finding my missing son until I accomplished a lot of what I consider to be prerequisites. So, yesterday I took the plunge and below is a pic of me and Father meeting for the first time.

This is my encounter with Father at the entrance to the Institute.

The reason I waited so long to enter the Institute is I’ve learned from past experience that there’s no rush to open this questline. Instead, I’ve concentrated on building two additional settlements and now have eight (3 large, 5 small). The large settlements have 24 settlers and small ones have 18. Following are some pics from Sanctuary, my favorite settlement.

This is a view of Sanctuary from the heavily defended front entrance.

Behind the main gate, I built a Slocum Joe’s. Cool. 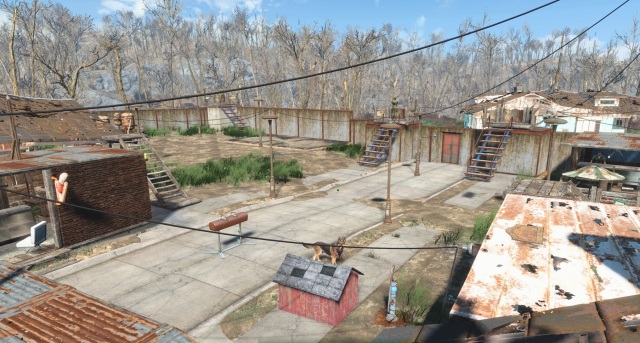 This is an inside view of the rear entrance to Sanctuary. (Notice Dogmeat smiling)

In addition to building the defenses for each settlement, I’ve beefed up all of my settlers armor and weapons (no small task). So, to the extent possible, my people are about as strong as I know how to make them and this should help me remained focused on the Institute without having to constantly race away from quests to defend the settlements. Nonetheless, defending Oberland Station is a bitch because raiders can spawn right inside the settlement walls (I really hate this).

In addition to beefing up my settlements, I’ve been installing new mods. When I left FO4 a year and a half ago I was using four mods (Militarized Minutemen, Settlement Management Menu, Spring in The Commonwealth, others); these didn’t require me to install extension DLCs (Far Harbor, Nukaworld, Automatron). I found that once Far Harbor is installed, the Brotherhood of Steel will start sending you on quests there, and if you’ve played FH before you realize that it’s a big DLC and you get pulled way off-track from the FO4 mainline. Anyway, many Mods will not work unless you have all DLCs installed, so I went ahead and installed them at around Level 60. I’ve added a few more mods including the Unofficial Patch (UFO4P), Blacksmith’s Crafting Station (WOW!), Craftable Cats (luv these kitties!), Settlement Cleaning Reveals (This is great, but it has some powerful side effects) and a few others.

I’ve been learning about mods and loving the variety, but most of the mods carry side effects and some are troublesome. So, I’ve got a lot to learn. OTOH, if you like building settlements, which I do, you can delight yourself with mod capabilities. One thing though, I think settlements work best as mini-castles in the Medieval sense. In essence, you create a safe environment for settlers surrounded by walls, and settlers join your settlement, but take the jobs you give them. And settlement income is yours to collect, cuz you’re the Queen/King of the realm. I’ve come to believe that a less rigorous approach means you protagonist has to deal with a lot of interruptions in the form of settlements being attacked. They still get attacked but when the settlements are stronger they have better results in combat.

HOWEVER, there is the SIM Settlements which I haven’t tried yet. From what I’ve read, SIM settlements allow the settlers to build their own houses and stores, and there’s a whole different feel to the SIM settlements. This sounds fascinating to me, but temperamentally I feel more comfortable building what I consider to be a safe environment, deciding which people will do which jobs, that kind of thing. In other words, I’d make a good fascist, but the situation is, you are leading the rebuilding of a world ravaged by a true apocalypse and extreme measures are required. For the vast majority of the settlers, almost any improvement in water, food, shelter, defense is an improvement in their lives. So, it makes you think, and it makes you wonder.

I’ll continue reporting on my progress, settlements and mods that I’m experimenting with. And so far, I don’t miss Fallout 76 at all. In fact and more and more, my concern about the Daily Ops grind in FO76 is turning out to be what I was envisioning when I left. On the positive side, Bethesda has done some good things to eliminate some types of griefing and Steel Dawn looks cool in concept, but for now I’m just tuning into videographers that I’ve come to trust. Maybe I’ll be back sometime next year.

I'm an avatar from Second Life and Xbox gamer. I wrote the sci-fi novel The Temporal Expeditions, and am working on book 2 of trilogy.
View all posts by Yordie →
This entry was posted in Fallout 4 and tagged Creating & Building, Fallout 4, FO4 Settlements, Gaming. Bookmark the permalink.