I was an explorer in Second Life and I’m an explorer in Fallout 76; well, I’m just an explorer by natures. Anyway, one of the most beautiful areas in FO76 is Twin Lakes. I had a camp there once before but it was too close to a Super Mutant breeding ground, so I was finding my home under constant attack. This time I’m trying a different area and I guess we’ll just have to see how it goes. I started building the new camp yesterday and finished today; unlike other camps I’ve created, this one focuses on my house. I’m still learning what I can do with the new build resources, so I might change the look again. But for now I’m happy with my new inworld home. What do you think?

This is a view from across a creek nearby.

The interior is much more important to me than in the past, but even though I think this first layout is comfortable (by FO76 standards), I still have a lot of ideas I want to tryout. Whaddaya think? 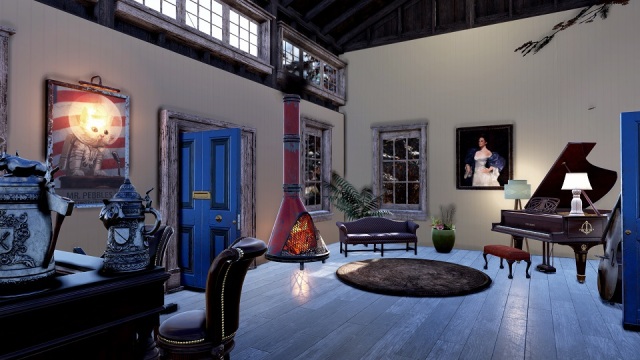 This is the great hall, so to speak. Also have a bedroom.

ALERT: Marta Branco (the Innov Survivalist) advises that Griefers have a new trick: destroying your Camp. The C.A.M.P.s ‘restore all’ feature makes the rebuild easy but it can cost a great of your resources for the rebuild. Marta says this type of griefing seems to be limited to PC games. I’m on an Xbox One X, and generally I think this is a safer place to play if you’re a gamers. Just sayin’.

Well, I don’t know. I still considering my adventure club for FO76, but I can’t get past the temporal nature of gameplay. Specifically, unlike Second Life, there are thousands of instances of the game and each instance has between two and four dozen players at any given time. That means, you have to link up with friend in advance, unless they just join you on your private server. A private server will allow eight people to play at once, and there’s a lot to be said for that but one of the features that was so great about Second Life is, you can drop inworld anytime and it’s all one world. Anyway, I’m still mulling this but if old friends from SL would like to join me, let me know. We’ll figure something out.

I'm a blogger and photographer on WordPress. I'm also author of the sci-fi novel The Temporal Expeditions, and am working on book 2 of a planned trilogy.
View all posts by Yordie →
This entry was posted in Fallout 76 and tagged Adventure, Beautiful Regions, Creating & Building, Exploring, Fallout 76. Bookmark the permalink.